This is a slightly overdue article, me being in IT and all, I still have this naive idea that I need to as much research as possible before offering an opinion on the topic.  Meanwhile all the lying politicos are spreading as much scare tactics  misinformation about it as possible, and it’s hard to get to the real nuts and bolts of it.

So I figured I’d better write what I do know, and if people want to have an honest discussion, we can have one.  But the bottom line is – you have nothing to worry about.  Really, if anything happens as a result that you don’t like, let me know and I’ll be the first to stand up for you.

if you haven’t heard, the FCC just issued a 3-2 ruling to repeal a 2015 ruling regulating the internet as a utility.   Their decision was built on the Net Neutrality philosophy – a voluntary creed that providers should never discriminate based on origin or destination of internet traffic.  Anything that goes through their networks, they need to just close their eyes to it.

FCC regulation of ISPs (Internet Service Providers) based on the Net Neutrality principle meant that the government now had oversight and control over how ISPs functioned.  Ostensibly, enforcing that they treat everything that flowed through their channels as invisible to them.

Let’s assume this was indeed the spirit of their regulation.  It still makes routing all that bandwidth pretty inefficient.  And it also means a lot of government intervention to enforce it.

So here’s what repealing this ruling doesn’t do: it won’t make you start paying for bandwidth, you won’t pay more for various websites, you won’t have your internet cut off. In case you haven’t noticed, those things have always been around.  You’ve always paid for speed, gigabits per month, overages, throttling, etc.

It won’t dry up internet access to rural area, or the poor, or people of color.  That’s an absolutely separate issue.  Neither will you start paying more for individual websites, as Banksy has famously tweeted.

No, all these are  straight lies and fear mongering by the left.  Again, people who say such irresponsible things should not be trusted or hold office.

So what is the repeal?  In a phrase, it’s back office reform.  Government is going to stay out of the way and let internet providers route it how they see fit.  Just like they did before 2015.  This will allow them to better optimize the traffic flowing through their hubs.

It should remain invisible to the consumer.

What it will be visible to is major websites who take advantage of Net Neutrality to choke up all the bandwidth. Like Netflix.  That’s why, in the end, this is a business vs. business fight – internet behemoths vs. ISP behemoths.

And to that, I have a simple meme: 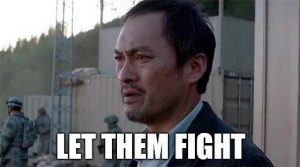