As I’ve said before, I’m generally not into the day to day political gossip. Especially when the mainstream press cries impeachment wolf for the countless time.  So when I heard of Flynn’s resignation I initially shrugged my shoulders.

But I also take a Trump victory seriously, and I take his pledge to #draintheswamp seriously.  There’s lots of slimy things in the swamp that don’t want their precious habitat destroyed, and they fight back.

So when my friend Thomas Wictor started talking about how the Flynn resignation was a sting, I started paying attention.  This could very well be phase I of Trump’s plan to drain the swamp.  And an indication of just how serious Trump is about commmitting to his campaign promises.

Thomas’s theory was strung along in 20 tweets.  I’ve compiled them in edited form for you below.  Oh, and he does some great military and foreign policy research.  You should check him out.

“Let’s say a person wants to hire a killer to bump off a spouse. They ask Mikey the Biker. Mikey goes to the cops.  A police officer poses as a killer for hire. He asks the person 900 times if they REALLY want to kill the spouse.  The cops says, “Let’s be clear: You want this person dead, right? You want me to shoot him in the head, right?”

It was clear that the CIA was telling the media stories about Flynn having inappropriate connections to Russia.  Now, imagine Trump as a cop playing a killer for hire. He began ASKING THE CIA IF IT REALLY WANTED TO DO THIS.

January 23: The OBAMA FBI CLEARS FLYNN OF WRONGDOING in his conversation with the Russian ambassador.

Now, the murderous spouse goes ahead and tries to hire the killer.

Acting Attorney General Sally Yates  warns the Trump administration that Flynn might be subject to blackmail by Russia.  Yates bases her warning ON A TRANSCRIPT. She’s the first murderous spouse caught in the sting.  She was fired January 31 for refusing to enforce the travel ban.

February 9: The New York times and Washington Post claim that Flynn discussed sanctions with the Russian ambassador.  The articles are crap. They contradict themselves. This is from the Post.

If those intelligence officials have firsthand knowledge, why can’t they tell us a straight story?

New York Times. Again, total confusion about what was said.

Finally, the proof that this was a sting: FLYNN KNEW HE WAS BEING RECORDED. From the Times. 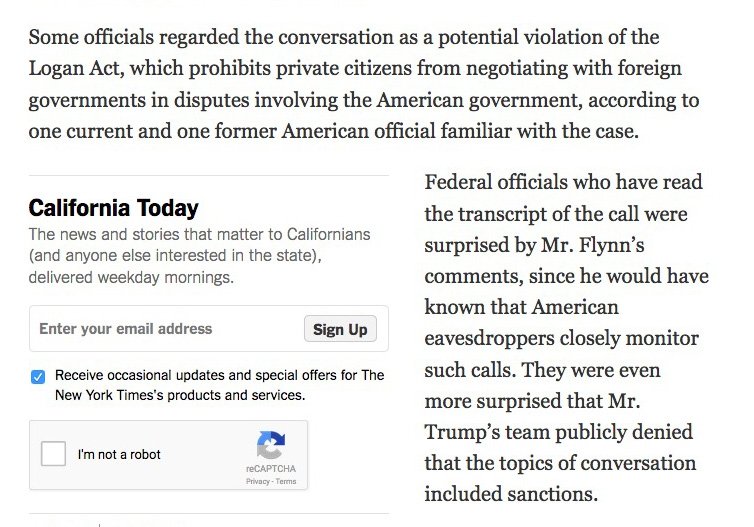 Trump warned, Clapper warned, and the FBI warned, but the CIA went ahead and leaked ANYWAY.  Trump, Flynn, Clapper, and he FBI set up the CIA. And now the CIA gets to have its peepee whacked REALLY HARD.  Right now a bunch of fat drunks are making deals with the feds to keep out of prison.

Why would Trump be impeached? You have to commit a crime to be impeached.  Stop being silly. The end.”

UPDATE: I told someone “time will tell” and gave a month to figure out the aftermath.  Turns out it took hours.  “The leaks are real, the news is fake.”  Though it’s not inexplicable if you go by this theory.  Thomas Wictor continues to explain:

“The New York Times and Washington Post interviewed over a dozen intelligence officials.  All those officials had seen transcripts of Flynn’s conversation with the Russians.  Yet all the officials told different stories.

A foolproof method of identifying someone talking to the press is to give him a specific story.  If that story is published, you know where it came from, because it’s a unique story.  Why would the intelligence officials have so many different stories if they read the same transcripts?  The only possible answer is that each official was given a different transcript.

The FBI cleared Flynn on January 23.  The “leaks” were published February 9.  So Trump has everything he needs to reform the CIA, NSA, etc.

The FBI and Senate Intelligence Committee are going to investigate now.  Trump ran his own sting a month back, when he identified intelligence officials as leakers.  Trump warned them that this was illegal.  It appears he’s taken dramatic action.  The end.”