The immigration issue is, worldwide, setting up to be the moral crux of our time.  And since it’s the most politically charged, it’s the most fraught with lies and agendas.  One thing I’d like to do is clear up the air on various aspects of the issue.  There’s endless details, endless lies circulating, so this will be the first on many articles.  I’ll try to touch on some basic issues.

The major lie out there is that Republicans are against immigration.  I hear Democrats, pundits, Super Bowl advertisers constantly repeat “immigrants made this country great!”  No shit, sherlock.  This isn’t stupidity on the part of Democrats, it’s an absolute lie.  It’s a way to frame the debate to make anyone who actually wants to return to an orderly immigration system as some sort of xenophobic bigot.

It’s a lie and a scare tactic, and so far it’s working quite well.  Beware anyone who says this line.  They have an agenda to push, and that agenda is eliminating borders and immigration law.

A subsequent issue that really made me lose my faith in the Democrats is the leftist charge against Obama having a record number of deportations.  This is a flat out lie.  It came about when Obama redefined the act of deportation to mean anyone turned away at the border.  As the article points out:

Okay, so first off, this makes an absolute lie of deportations. Technically, the practice started under George W Bush to give a formal record to those caught crossing illegally.  But immigration activists have twisted it into a total lie of what’s really happening.  Deportations have actually gone down significantly under Obama.  And more so, the Democrats are increasingly backing down on immigration law.

We’re also constantly sold that immigration is good for our economies, that immigrants put in more than they take out, revitalise bad neighborhoods, etc.  This is true, to a point.  And I think we’re well past that point.  More people means a bigger economy provided they do find jobs and contribute.  In earlier days immigrants got very little aid, and most of it was through private and community charities.  These days the state hands off most of the aid.

We are being pushed to give driver’s licenses, benefits, we grant them virtual immunity from deportation.

It’s gotten to the point where it’s not enough to be okay with all this.  Trump just saying we want to deport the criminals is raising mountains of wild protests calling for his impeachment and his head.  And the lies and fear mongering … just endless.  There is no Muslim ban, hordes of jackbooted thugs are not amassing to run through the barrios and pull out anyone who can’t identify their papers.  Trump’s main plan is to seal the borders, properly vet those coming in, and boot out the criminal illegals.

But we can understand why this rancor over such simple things.  Because they signify an about-face from our current trajectory.  If we were to continue on this dissolution of immigration law for just a few more short years, a citizen will be indistinguishable from anyone hopping the fence.

And that’s the point.  Across the Atlantic, the refugee crisis is the biggest specific lie of our time.  The photo op of the mother and daughter fleeing persecution is absolute lie.  By the UN’s own statistics 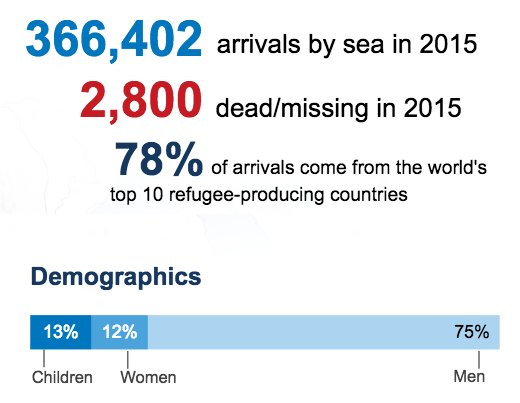 , in 2015 75% of “refugees” were adult men, 12% were women, and 13% were children.  If you figure kids had the same gender split, you’re looking at close to 90% men.  Probably even more than that if you assume the UN at least partially skews statistics to suit agendas.  The pictures of migrants streaming into Europe looks more like an invading army than a huddled surrendered mass.

I say “refugees” because they’re really not refugees.  Europe has found a lovely loophole to bring in mass of third world labor to refresh their economies.  It involves a combination of three things: 1) use the refugee status to allow anyone to come over the border from a war-torn country into a neighboring stable country 2) have zero monitoring to distinguish refugees from migrants 3) use the EU’s open border policy so that once a migrant is in any EU country, they can freely move into any other EU country.  This is how people from North Africa and the Middle East can so easily wind up all the way in Sweden.

I mention this because our immigration issue is related to Europe’s.  The people pushing for open borders for Europe are pushing for them here.  Make no mistake.  It is the most important issue of our time.  It will determine whether you have any rights and privileges as a citizen in 20 years or not.

Right now, it seems the Republicans are our only fighting chance.